EWG helps protect your family from pesticides! Donate $10 today and EWG will send you our Shopper's Guide to Pesticides in Produce™ wallet guide FREE to say thank you.

The USDA tests found a total of 230 different pesticides and pesticide breakdown products on the thousands of produce samples analyzed. EWG's analysis of the tests shows that there are stark differences among various types of produce. The Shopper's Guide to Pesticides in Produce™ lists the Dirty Dozen™ fruits and vegetables with the most pesticide residues, and the Clean Fifteen™, for which few, if any, residues were detected.

Twenty-five years after the National Academy of Sciences issued a landmark report raising concerns about children’s exposure to toxic pesticides through their diets, Americans still consume a mixture of pesticides every day. While vegetables and fruits are essential components of a healthy diet, research suggests that pesticides in produce may pose subtle health risks.

A recent study in JAMA Internal Medicine, a journal of the American Medical Association, found a surprising association between consuming high-pesticide-residue foods and fertility problems among participants in the Harvard University EARTH study.1

Women who reported eating two or more servings per day of produce with higher pesticide residues were 26 percent less likely to have a successful pregnancy during the study than participants who ate fewer servings of these foods. A previous study of male participants found similar associations between consumption of high-residue produce and reproductive health. Both studies drew from couples seeking treatment at a fertility clinic, and found that the frequency of eating fruits and vegetables with fewer pesticide residues was not associated with fertility outcomes.

The findings from the EARTH studies raise important questions about the safety of pesticide mixtures found on produce, and suggest that people should focus on eating the fruits and vegetables with the fewest pesticide residues. Importantly, the studies’ definition of higher and lower pesticide foods mirrors EWG’s Dirty Dozen and Clean Fifteen lists. So, when buying organic produce is not an option, use the Shopper's Guide to choose conventional foods lower in pesticide residues. With the Guide, you can have the health benefits of a diet rich in fruits and vegetables while limiting your exposure to pesticides.

Highlights of the Dirty Dozen™ for 2018

Each of these foods tested positive for a number of different pesticide residues and contained higher concentrations of pesticides than other produce.

See the full list of fruits and vegetables with pesticide residue data.

Most processed foods typically contain one or more ingredients derived from genetically engineered crops, such as corn syrup and corn oil made from predominantly GMO starchy field corn. Yet GMO foods are not often found in the fresh produce section of American supermarkets. According to the USDA, a small percentage of zucchini, yellow squash and sweet corn is genetically modified.2 Most Hawaiian papaya is GMO.

Again this year, EWG has expanded the Dirty Dozen list to highlight hot peppers, which do not meet our traditional ranking criteria but were found to be contaminated with insecticides toxic to the human nervous system.

The USDA tests of 739 samples of hot peppers in 2010 and 2011 found residues of three highly toxic insecticides – acephate, chlorpyrifos and oxamyl – on a portion of sampled peppers at concentrations high enough to cause concern.3 These insecticides are banned on some crops but still allowed on hot peppers. In 2015, California regulators tested 72 unwashed hot peppers and found that residues of these three pesticides are still occasionally detected on the crop.4

The federal Food Quality Protection Act of 1996 mandated that the Environmental Protection Agency tighten regulation of pesticides and reduce the risks of pesticide exposure for children. The law prompted the EPA to review and restrict the use of many chemicals, including highly toxic insecticides, which affect the brain and nervous system.

Over the past two decades, many of the most toxic pesticides have been withdrawn from many agricultural uses and banned from household pesticides. Yet others, such as organophosphate insecticides, are still applied to certain crops.

Several long-term studies of American children initiated in the 1990s found that children's exposures to organophosphates – not only in farm communities but also in cities – were high enough to cause subtle but lasting damages to their brains and nervous systems.5 Children with higher concentrations of organophosphate and pyrethroid pesticides in their bodies are more likely to be diagnosed with ADHD.

Between 2014 and 2017, EPA scientists re-evaluated the evidence suggesting organophosphate pesticides affect children’s brain and behavior. The EPA concluded that ongoing use of one pesticide, chlorpyrifos, was not safe and proposed to ban the chemical. However, shortly after taking office, EPA Administrator Scott Pruitt cancelled the scheduled chlorpyrifos ban and announced that the agency would not finish its safety assessment for chlorpyrifos until 2022.

A group of recent studies suggest an association between consumption of fruits and vegetables with higher pesticide residues and fertility issues. The Harvard EARTH study found that men and women who reported more frequent consumption of high-residue produce had fertility problems.1,6 At the same time, the amount of lower pesticide residue fruits and vegetables in their diets was not associated with negative effects. The researchers have also detected similar fertility impacts in younger men.

Participants in the Rochester Young Men’s Study who reported eating three or more servings of produce with low-to-moderate pesticides had about a 70 percent increase in sperm count and concentration compared to men who ate one or fewer servings daily.7 In contrast to the EARTH study, self-reported consumption of higher-pesticide-residue foods was not associated with poorer sperm quality.

It takes many years and extensive resources to design studies that test the effects of dietary exposures to pesticides. The long-term studies of organophosphate pesticides on children’s brains and behavior took more than a decade to complete. Yet they provided a unique chance for scientists to study the safety of real world exposures in children, and account for their simultaneous exposure to other pollutants that are widely detected in Americans’ bodies.

The result was evidence that the human brain is many times more sensitive to the neurotoxic effects of organophosphate chemicals than those of laboratory animals, a finding that upended the EPA’s traditional approach to assessing pesticide safety. The three fertility studies confirm the need to carefully examine the effects of dietary exposure to pesticide mixtures on reproductive health.

How consumers can avoid pesticides

People who eat organic produce eat fewer pesticides. A 2015 study by scientists at the University of Washington found that people who report they often or always buy organic produce had significantly lower quantities of organophosphate insecticides in their urine samples. This was true even though they reported eating 70 percent more servings of fruits and vegetables per day than adults who reported they rarely or never purchase organic produce.8

The fertility studies demonstrate potentially subtle but important impacts of eating lower-pesticide-residue produce. These studies define low- and high-residue foods in a method similar to EWG’s guide. They utilize the same data source, the USDA’s Pesticide Data Program, and create a crop-level residue index that largely overlap with EWG’s Dirty Dozen and Clean Fifteen lists. The researchers found that people’s self-reported dietary habits correspond to pesticide measurements in their bodies. Male EARTH study participants who reported the highest consumption of high-residue crops had higher concentrations of organophosphate and pyrethroid insecticides, and the herbicide 2,4-D in their urine relative to participants who eat these foods less often.9

In 2012, the American Academy of Pediatrics issued an important report that said children have "unique susceptibilities to [pesticide residues'] potential toxicity." The organization cited research that linked pesticide exposures in early life to pediatric cancers, decreased cognitive function and behavioral problems. It advised its members to urge parents to consult "reliable resources that provide information on the relative pesticide content of various fruits and vegetables." A key resource cited was EWG's Shopper's Guide to Pesticides in Produce10

The Shopper's Guide ranks pesticide contamination on 47 popular fruits and vegetables based on an analysis of more than 38,800 samples taken by the USDA and the Food and Drug Administration. The USDA doesn't test every food every year, so EWG generally uses data from the most recent one- or two-year sampling period for each food. The USDA doesn’t test two fruits, honeydew melons and kiwis, so EWG uses data from the Food and Drug Administration’s pesticide monitoring for these crops.

Nearly all the tests that serve as the basis for the guide were conducted by USDA personnel, who washed or peeled produce to mimic consumer practices. It is a reasonable assumption that unwashed produce would be likely to have higher concentrations of pesticide residues, as is typically found in California Department of Pesticide Regulation tests that include unwashed, unpeeled produce.11

For each metric, we ranked each food based on its individual USDA test results and then normalized the scores on a 1 to 100 scale, with 100 being the highest. A food's final score is the total of the six normalized scores from each metric. When domestically grown and imported produce items had notably different scores, we displayed them separately to help guide consumers toward lower-pesticide options. The Shopper's Guide full list shows fruits and vegetables in the order of these final scores.

Our goal is to show a range of different measures of pesticide contamination to account for uncertainties in the science. All categories were treated equally. The likelihood that a person would eat multiple pesticides on a single food was given the same weight as amounts of the pesticide detected and the percent of the crop on which any pesticides were found.

The Shopper's Guide is not built on a complex assessment of pesticide risks but instead reflects the overall pesticide loads of common fruits and vegetables. This approach best captures the uncertainties about the risks and consequences of pesticide exposure. Since researchers are constantly developing new insights into how pesticides act on living organisms, no one can say that concentrations of pesticides assumed to be safe today are, in fact, harmless.

The Shopper's Guide aims to give consumers the confidence that by following EWG's advice, they can buy foods with fewer types of pesticides and lower overall concentrations of pesticide residues.

This article was adapted and updated from the 2017 Shopper's Guide. 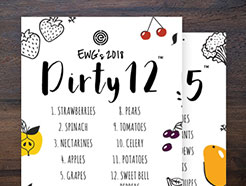 EWG helps protect your family from pesticides! Donate $10 today and EWG will send you our Shopper's Guide to Pesticides in Produce™ wallet guide FREE to say thank you.

Shopper's Guide to Pesticides in Produce™

EWG helps protect your family from pesticides! Donate $15 today and EWG will send you our Shopper's Guide to Pesticides in Produce™ bag tag FREE to say thank you.